We had the most fantastic time at Glastonbury with our small and handpicked team.  We were lucky enough to be adopted by GreenCrafts, run by Nic and Marie Piper, and got the chance to showcase some of the craft skills we have been learning.

What started as a bit of a mad idea – that is ‘why not make a deer head dress and work a bit of antler’ has grown into a whole new area of activity. 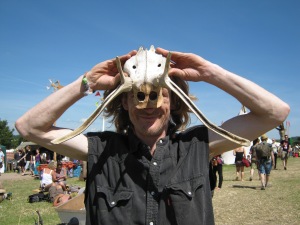 Did they wear them like this? (modelled by our favourite fire keeper)

For Glasto we were tasked with demonstrating our skills (well Ian’s) and getting the public involved.  After much debate we ended up with a workshop that introduced antler working to people – using both flint and metal tools.

Flint worked antler included our Star Carr head dresses, barbed point and new work creating ‘Ice Age Art’.  Metal worked antler was demonstrated by a range of antler combs and pins, all of which are copies of material we recovered from our Viking excavation on South Uist in the Western Isles. 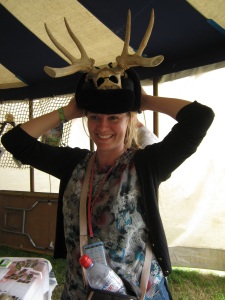 We  spoke to people about deer species, their behaviour, management, their hunting and consumption as well as their ritual and symbolic use – deer antler picks were used to make the majority of iconic British prehistoric monuments (Stonehenge, Silbury Hill, Grimes Graves etc) and once completed the antlers were often left in the ditches and fills, as well as being buried with people or just buried as whole animals.

There are a range of antler rings recovered from metal worked assemblages and we decide to give people the chance to make their own. This took around two hours, however nearly 50 people invested their time in this and all produced beautiful rings.  For the ring gallery please see the Flickr Glastonbury ring set – each ring is shown separately and with its new owner – we think the images alone tell the story. 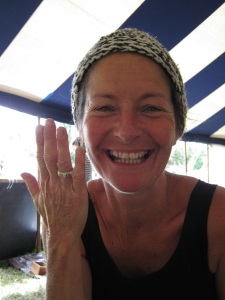 We provided bands of antler that were filed down, polished and then decorated by Ian using a fine saw.  Whilst people worked there was plenty of opportunity to chat about archaeology, antler working, skills and just about anything and everything under the sun.  Craft working is a great way to meet new people and makes the festival experience mush more inclusive as well as creative.

We pestered folk for feedback as we need to prove to external forces we don’t just go on ‘jollies’ – rather we work as hard as we play.  We got some great comments and one lucky person won our wooden deer figure.

We once again learnt as much from our audiences as we hope we conveyed to them – we even attracted a few archaeologists to come and visit.

Kate the Blacksmith hosts a wedding

We also got to hang out with chanting monks…. 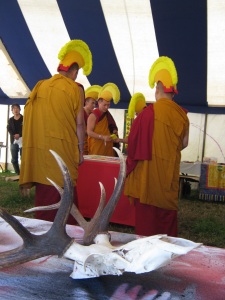 The monks and their mandela

We hope to return and offer more people the chance to explore their relationship with animals via craft activities.  Ian is already working on antler bangles for next year – these are known from Roman contexts, but have previously been described as difficult to produce. He has of course already completed his first.

What folk say about us…..in one word each! 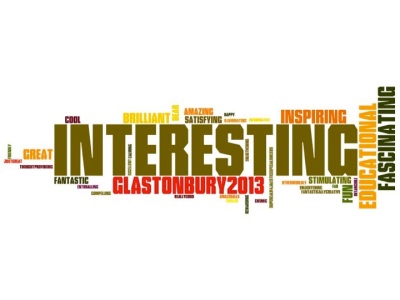 Finally here are examples of the comments we received!

We (Guerilla Archaeology) use innovative ideas to make archaeology more accessible do you think this works?

It works very well –  stall was very interesting, and the people very enthusiastic and friendly  – absolutely – really helps make it come to life and interesting for my children too –  the activities were really innovative and different and made the subject much more alive and interesting

What did you learnt about ancient people and animals?

Did we make you think about the relationship we have with animals now?

That we are disconnected – Basically we use and abuse them for our own ends. On an individual level we can make a small difference with our buying power and the way we behave towards nature, but on a global scale its beyond our power – yes and how there is so much more we can do to work with them – we treat animals really badly today especially with factory farming and mass production of meat we treat them as though they have no spirit or feelings

Do you think ancient people thought differently about animals than we do today?

Yes, very differently – I imagine they were less sentimental – yes, held them in much higher respect and not as a commodity that you find chopped up at a supermarket – Ancient people had a lot more respect for animals and they had a kind of mystical relationship with animals as well as exploiting them as a resource

If you made a ring – tell us about your experience of making the ring – did it connect you with animals, the past, new skills and new friends?

I thought a lot about the materials I was using. I learned new skills, and I made lots of new friends – Absolutely.  I learned a little about the structure of the antler, and I appreciated how much more difficult the task would have been with ancient tools. Drying dogfish skins to make emery cloth, very laboriou  –  LOVED making the ring, and see it as a prototype, I want to make a more elegant and tapered ring, and intend to do so,(forget the dogfish though) – yes was a great experience and a beautiful thing of value to walk away with – Was brilliant, I’m wearing mine today. More meaningful to use than a peace of metal

Is there anything else you would like to add about your experience with Guerilla Archaeology?

It was fantastic fun! I thought the team were great, Ian was enormously patient with us, clearly he is passionate about his work. Well done, Cardiff – Really interesting, would love to get involved in other workshops and for the children too – ALL ROUND VERY GOOD – GA in the Greenfield was brilliant – made archaeology come alive and interesting made me want to know more