We know that the stars would have shone brightly in prehistory and were probably used for navigation and to map the passing of the season, but is there any evidence for star gazing?

A number of researchers have identified various sets of dots that they think are  star maps or constellations and others have suggested that caves were chosen for their astronomical alignments. 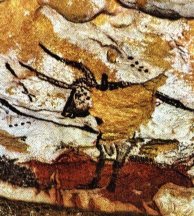 For example in Lascaux cave, amongst some  600 paintings and 1500 engravings dating from the Palaeolithic Period , there are a only a few non-figurative images.  These are isolated or grouped dots (mostly black) and to variously coloured dashes and some are associated with the great bull (or an aurochs) and these have been given an astronomical interpretation.  There are two set of dots on the bull, one above the shoulder of the bull and a second V-shaped set located on the bull’s face. There is a row of 4 painted dots to the left of this bull. The four dots have been ascribed to orion’s belt, the 6 dots as the Pleiades open star cluster, and the group on the aurochs’ face to be the Hyades open star cluster.There has however been much debate about this are people just finding patterns where none exists, where  these stars visible and were they likely to have had any navigational relevance?

In the Cava di El Castillo, Punto Viesgo in Spain, as well as numerous images of animals, humans and handprints the author noted a single perfect five point star, unfortunately there is no image available of this.